Connected is Tiffany Shlain’s acclaimed Sundance feature documentary film garnering 17 awards including Grand Prize and Audience awards from festivals around the world. Some highlights were it’s selection by the US State Department to represent America and the Disruptive Innovation Award from the Tribeca Film Festival. It had theatrical release in 2011 and launched Shlain’s Let it Ripple Non Profit film studio.

“Ostensibly a film about technology, but it’s really about human beings.”
– NPR Marketplace

“An intensely personal exploration of what human connection means in our modern, technology-obsessed world.”
–The Atlantic

“A personal yet universal story about the Internet Age…Connected is a highly energized romp through a myriad of ideas about where the human race is headed.”
–The Hollywood Reporter & Reuters UK

“Incredibly engaging ..Like high-tech Terry Gilliam…So lively and so fun, I could not take my eyes off of it!”
–Bits: Tech Talk, The New York Times

In this funny, eye-opening, and inspiring film, Director Tiffany Shlain takes audiences on an exhilarating rollercoaster ride to discover what it means to be connected in the 21st century. From founding The Webby Awards to being a passionate advocate for The National Day of Unplugging, Her love/hate relationship with technology serves as the springboard for a thrilling exploration of modern life…and our interconnected future. Equal parts documentary and memoir, the film unfolds during a year in which technology and science literally become a matter of life and death for the director. As Shlain’s father battles brain cancer and she confronts a high-risk pregnancy, her very understanding of connection is challenged. Using a brilliant mix of animation, archival footage, and home movies, Shlain reveals the surprising ties that link us not only to the people we love but also to the world at large. A personal film with universal relevance, Connected explores how, after centuries of declaring our independence, it may be time for us to declare our interdependence instead.

You can watch the whole film for free at the above vimeo link. If you want the educator’s edition, information below. 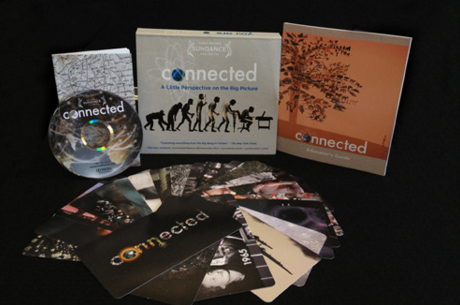 Get the award-winning film that educators around the world are using to inspire conversations about the good, the bad and the potential of all the ways we’re connected in the 21st century. We have partnered with a wonderful educational distribution team, Ro*co Educational.

The Ripple that came from the film

The 80-minute film explores questions around meaning and purpose in today’s hyperconnected world, and ends with the questions: “what’s the potential of having so many people around the globe connected through the Internet and smart devices?”, and, “if we’ve been declaring independence for centuries, what could it look like if we truly declared interdependnece?” These questions led to our first Let it Ripple film, “A Declaration of Interdependence” (4 mins), and ultimately our whole cloud filmmaking series (where we make films interdependently with people around the globe) that have become the backbone of our film studio Let it Ripple and our global days of film and discussion with Character Day, 50/50 Day and the many cloud films she and her team have made.

“Fast-paced, funny and full of pertinent flashes on contemporary ways of being, Tiffany Shlain meditates on the state of our technologised lives.”

“Coming at it from both a personal and political perspective, she explores how our path of progress has resulted in a simultaneous strengthening and weakening of global societies.”

“Bravely tackling the big themes – metaphysics, nature, gender relations – she reflects on achievements already made and potential still to be realised.”

“Clever, witty and stylish, it’s a film about geeks, brains, bees and feminist…”

“Indeed, Shlain’s film does go wide — it’s like a rubber band stretching in multiple directions while not breaking. Examining the ways in which technology can productively unite our global citizenry, Connected details nothing less than the history of consciousness and its arrival within today’s always-on, hyper-wired mind.”
–Filmmaker Magazine

“Tiffany Shlain Explains How We are All Connected.”
– The Wall Street Journal

In a film that mixes wildly creative animation with found and archival footage, she unpacks the interrelatedness of honeybees, history, and technology — and explores the possibility of a potential shift from a left-brain to a right-brain culture. She also delves into the riches of human connection. For instance, did you know every time you make a contact with another person, even in a text message or tweet, your brain releases oxytocin, also known as “the love hormone”? The film illuminates the necessity of our interdependence and our ability to use technology to share ideas and make connections for a better world.
– Grist.com

Connected is a sagely and even delightfully presented story of our interconnectedness as a species – among ourselves, all living things, and the technologies through which extend ourselves and give substance to our imaginations, plans, and desires….in the hope it holds out for our new media, it is the kind of movie Buckminster Fuller might have made.
– Paul Levinson’s Infinite Regress