PRESS RELEASE: Over 40 Thousand Events Set to Take Place in 70 Countries in Celebration of Character Day on September 22 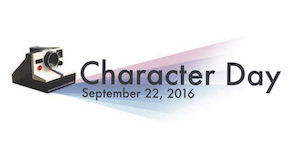 To host your own event, visit: CharacterDay.org

San Francisco, CA (August 25, 2016) – Today, Emmy-nominated filmmaker and Webby Awards founder, Tiffany Shlain, announced the partners and renowned thought-leaders that will participate in the  third annual Character Day event on September 22.  The initiative—held across the globe with over 40,000 live events throughout 70 countries, and via a 24-hour Global LiveCast Q&A—will feature experts in the field of character education and will engage schools, corporations, universities, civic and other groups in a conversation about the importance of character development.  Participating groups and unique events planned for 2016 have more than quadrupled since 2015.  Additional individuals and/or groups interested in hosting their own Character Day event can visit CharacterDay.org to find out how.

Character Day participants will be given access to award-winning films, conversation starter kits, a comprehensive online resource hub and a mobile app that includes over 5,000 pieces of curated content surrounding the importance of character development to help them create and host their own Character Day events.  This year, participants are encouraged to join the movement across social media by taking to Facebook, Twitter and Instagram to nominate a friend, family member, community leader or someone they admire who exhibits one or more character strengths (i.e. empathy, grit, humility and courage, etc.). Participants can post their nomination using the official hashtag #CharacterDay2016 across their social profiles.

“Character Day 2016 comes at a crucial time, when what it means to be a good person in our society demands our renewed focus,” said the initiative’s creator, Tiffany Shlain.  “From the way we express ourselves and treat each other online to how we communicate our politics—there is amazing scientific research to draw upon when it comes to how to strengthen one’s character.”

Speakers from renowned institutions around the world will join the Global LiveCast Q&A to discuss a variety of topics as they relate to one’s character. Speakers include: Dr. Martin Seligman, author and psychologist widely considered to be father of the Positive Psychology movement; Dr. Angela Duckworth, Professor of Psychology at the University of Pennsylvania and author of the bestselling GRIT The Power of Passion and Perseverance; Sal Khan, founder of Khan Academy; Rabbi Lord Jonathan Sacks, philosopher, bestselling author and former Chief Rabbi of England.; and Julie Lythcott-Haims, author of the New York Times bestselling book, How to Raise an Adult.

Psychologist Dr. Seligman notes, “Human well-being is not a matter of just smiling and being cheerful.  Well-being must be deserved; it must be grounded in character strengths and virtues.”

Partner Organizations for Character Day 2016 include: The U.S. State Department, Lady GaGa’s Born This Way Foundation with INTEL, The United Nations, U.N. Foundation, Common Sense Media, American Federation of Teachers, The Teachers Guild, and over 75 school districts around the country.  The Teachers Guild created a Character Day booklet that will be introduced on Character Day and available to all teachers across the country. Los Angeles Unified School District has declared September 22 Character Day across the city and is encouraging all schools to join the global initiative.  Additionally, Washington DC Public Schools, San Francisco Unified, Oakland Unified, UT Dallas, Baltimore’s Montgomery County Public Schools, and The Dalai Lama Center for Ethics at MIT have all have signed up to participate.  Below, please find a full list of Character Day partners or please visit CharacterDay.org.

To learn more about hosting an event, please visit CharacterDay.org.

Character Day is an interactive initiative engaging schools, corporations, universities, civic- and faith-based organizations, families and other groups in a global conversation about the importance of character building in today’s increasingly distracted and overly-connected world.  Anchored by a 24-hour global webcast with thought leaders discussing character from all points around the globe unifying the over 40,000 live events in 70 countries, Character Day participants engage with the topic by screening award-winning short films, engaging with hands-on discussion materials and online resources, and joining the global LiveCast conversation and Q&A session about character from different perspectives. You can sign up for more information about Character Day, and watch the initiative’s featured films, including The Science of Character (8 mins), The Adaptable Mind (10 mins) and The Making of a Mensch (10 mins) by visiting CharcterDay.org.
About Let It RippleLet It Ripple’s mission is to use film, technology, discussion materials, and live and virtual events to engage people in conversation and action around the complicated subjects that are shaping our lives, while  updating these topics through an engaging, accessible, 21st century lens. Over the past ten years, Let It Ripple has created and distributed 28 films, engaged over 50 million people in dialogue, and created a new way of making films, called “Cloud Filmmaking.” With this new approach, films are created collaboratively with people all over the world then offered for free as a customizable version to thousands of schools and nonprofits as a means of helping them to further their reach.
Let It Ripple is led by Tiffany Shlain, Emmy-nominated filmmaker and founder of The Webby Awards.  Shlain has had four films premiere at Sundance, won over 80 awards, and her work has been singled out by the New York Times as “Examining everything from the big bang to Twitter.” Four of the studio’s films were selected by The U.S. State Department to screen at embassies around the world as part of the American Film Showcase. The studio’s AOL Original hit series, The Future Starts Here, was nominated for an Emmy Award in the category New Approaches: Arts, Lifestyle & Culture, and has over 40 million views. One of the series’ most viewed episodes is “Technology Shabbats” where Shlain shares her family’s ritual of unplugging from all screens for one day a week for the past six years.