Building mensches one Character Day at a time 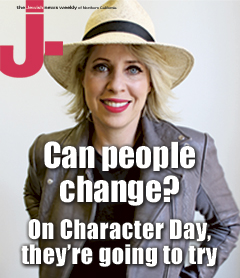 Last year, Rabbi Laurie Hahn Tapper sat in on a third-grade morning meeting at Yavneh Day School in Los Gatos, where she works. The topic was self-control, and one by one, the children went around the circle and shared stories of how they had practiced or struggled with self-control. When the “talking heart” finally made its way to one little boy, he spoke with urgency and immediacy.

“I’m practicing self-control right now because I really want to put my arm on my neighbor and lay down on him,” he said, “but I know I have to sit here.” Tapper, who is the school rabbi and director of Jewish studies, recalled the exchange fondly as she spoke with J. recently, during the first week of the new academic year. “It was really heartfelt,” she said. “Once you give them the language to articulate something that feels confusing inside, they start using it.”
At Yavneh, a Jewish K-8 school, concepts like “self-control,” “perseverance” and “gratitude” are part of the curriculum. Like a growing number of schools across the country, Yavneh has elevated character development to a central part of its educational mission. Character is a core skill to be developed in students, alongside reading, science and math.

“We teach our kids how to flex their mensch muscles,” Tapper said.

In just a couple of weeks, Yavneh will join more than 50,000 schools, synagogues, churches and community organizations in 80 countries around the world on Sept. 22 for what could be considered the mensch Olympics: Character Day.